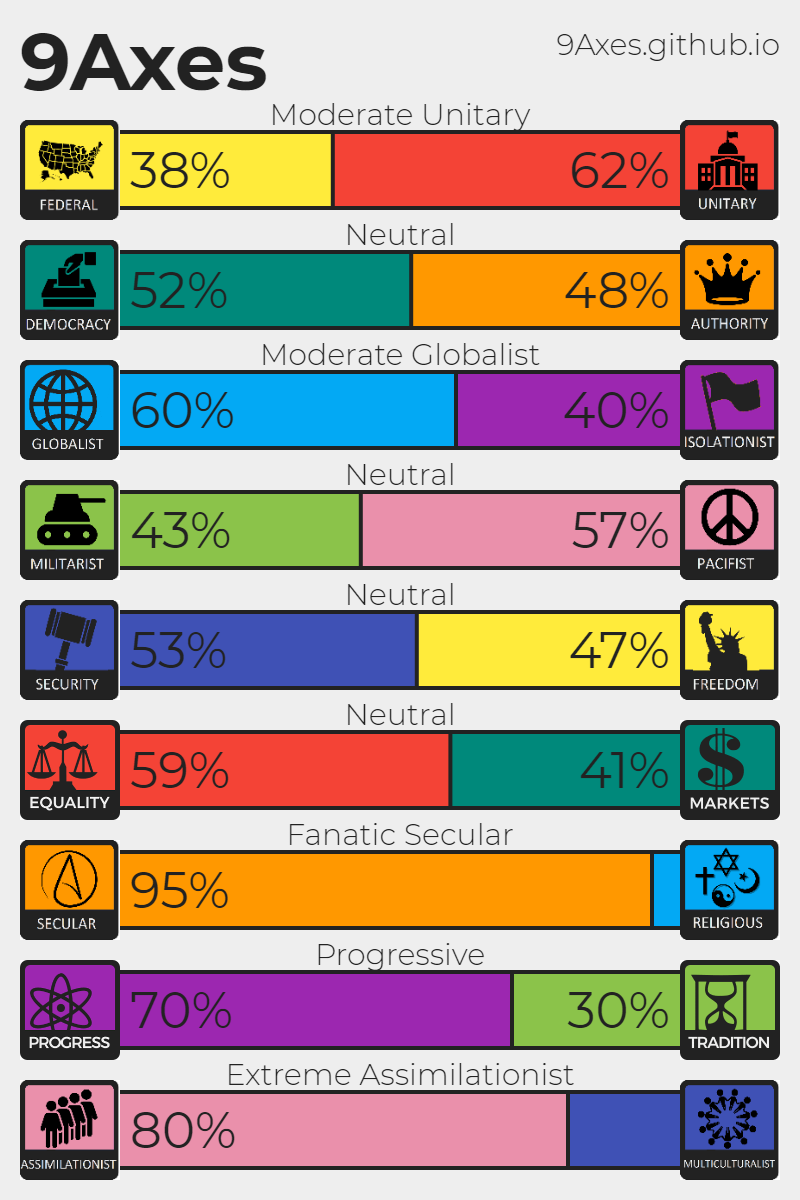 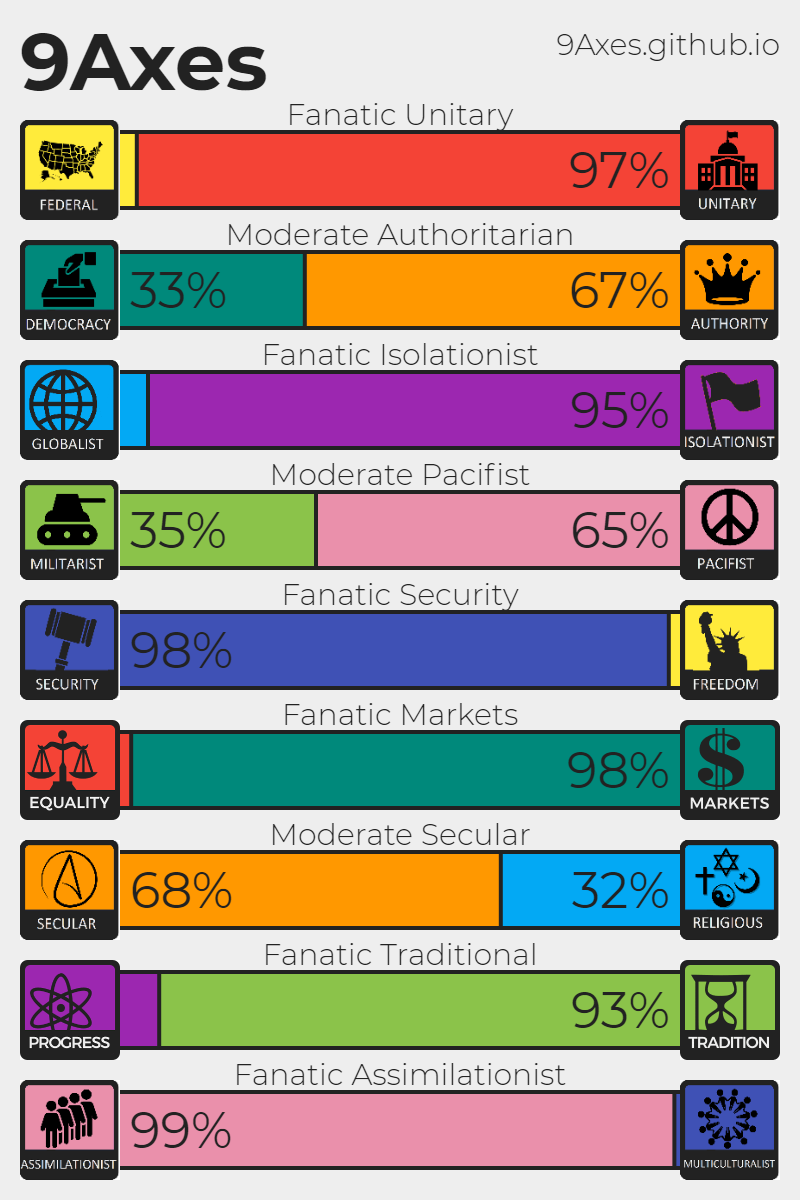 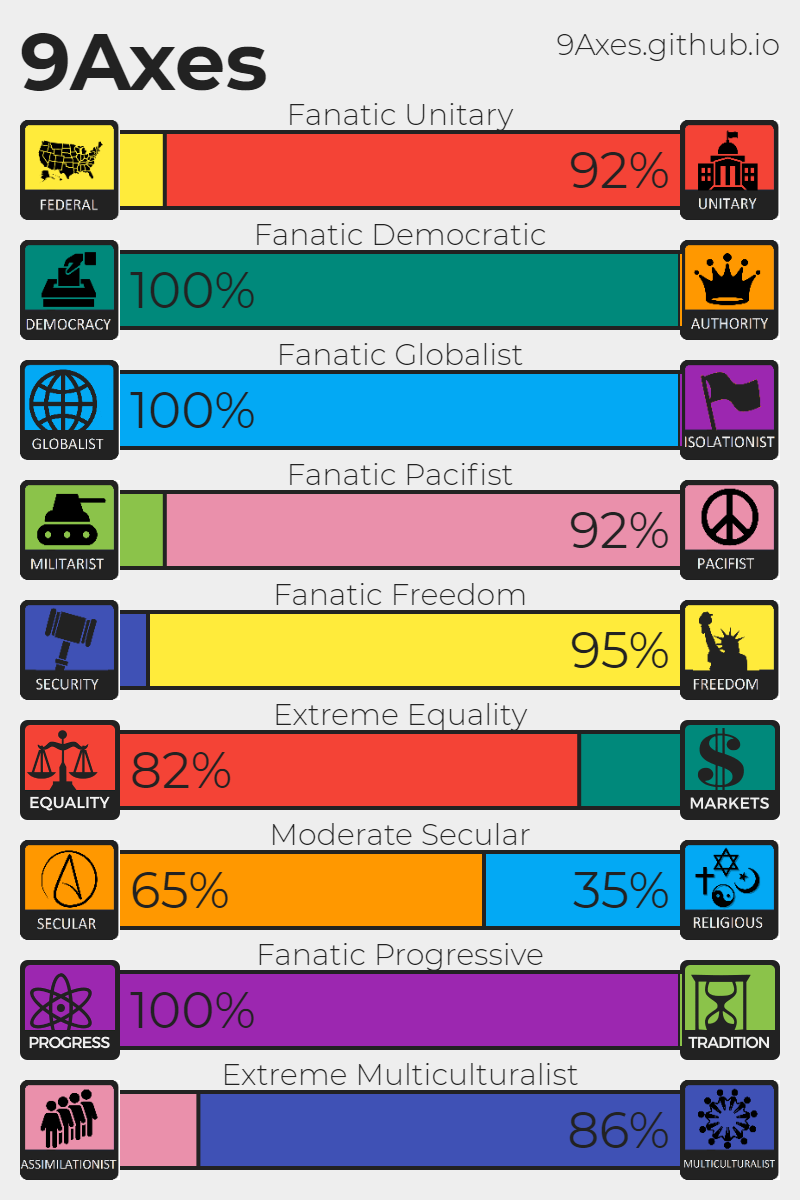 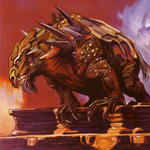 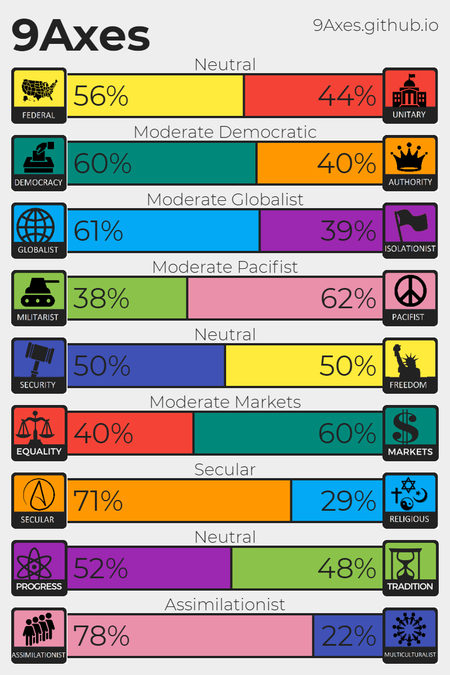 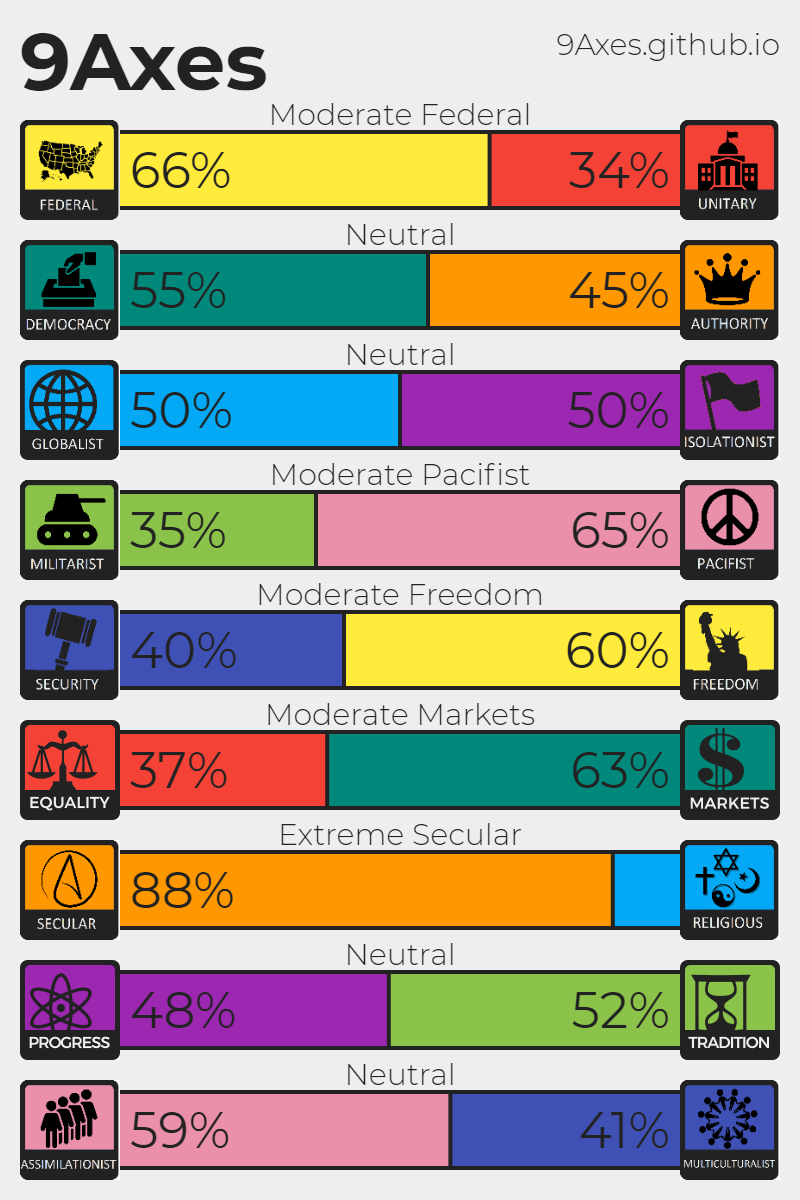 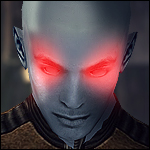 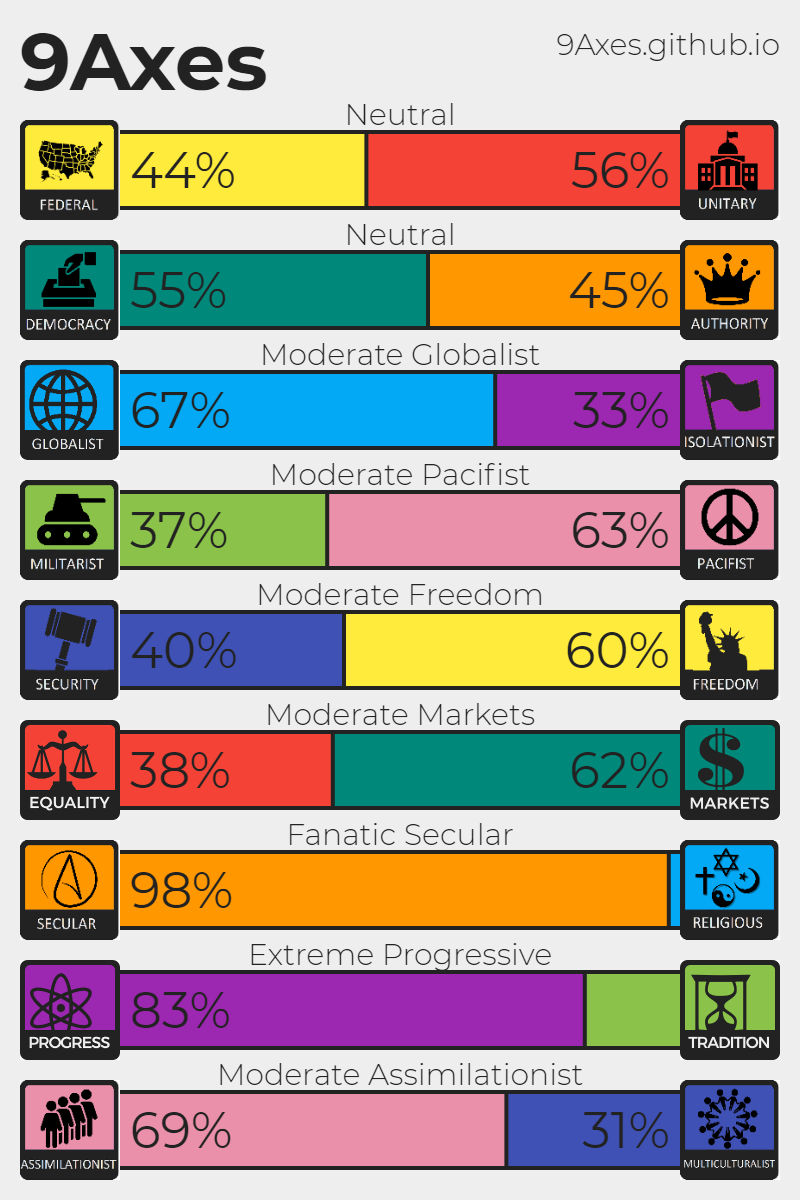 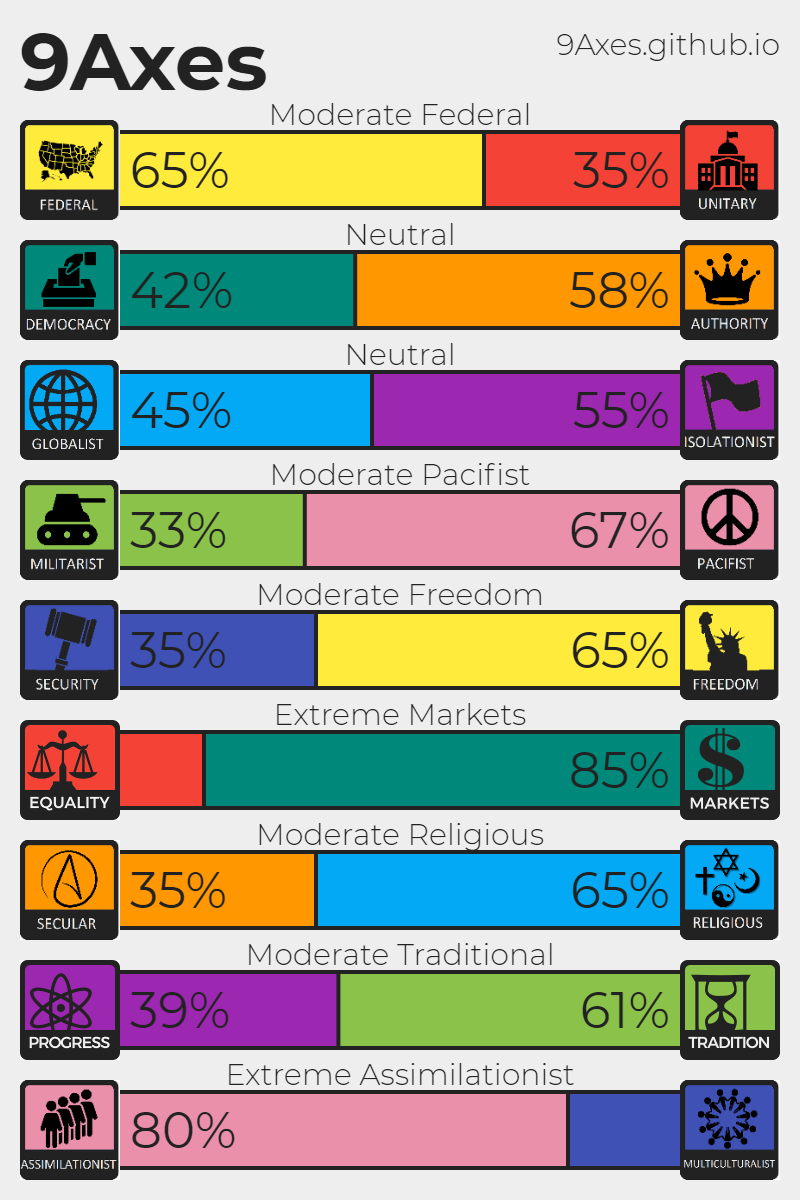 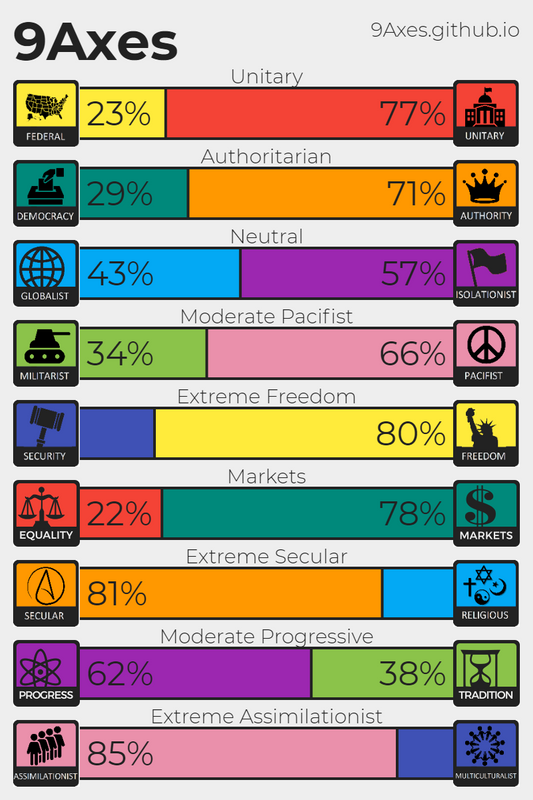 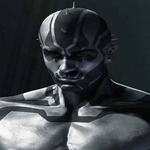 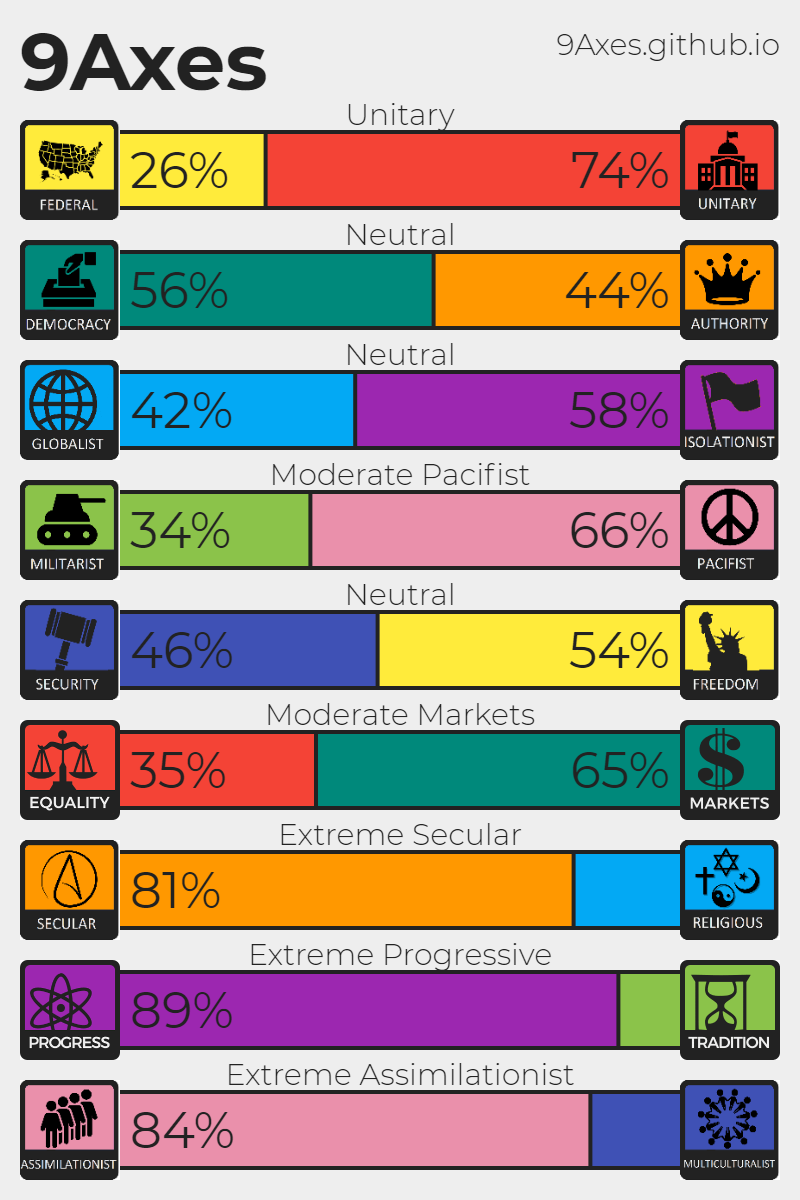 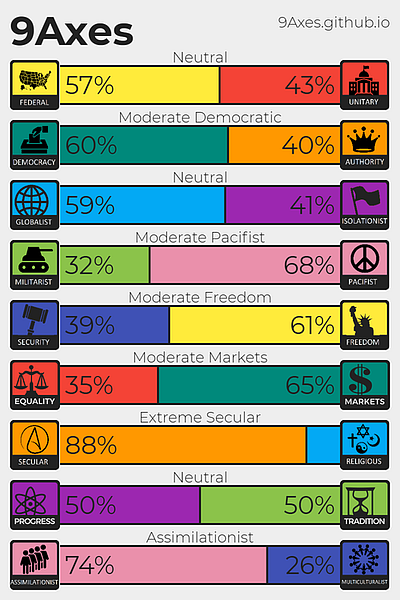 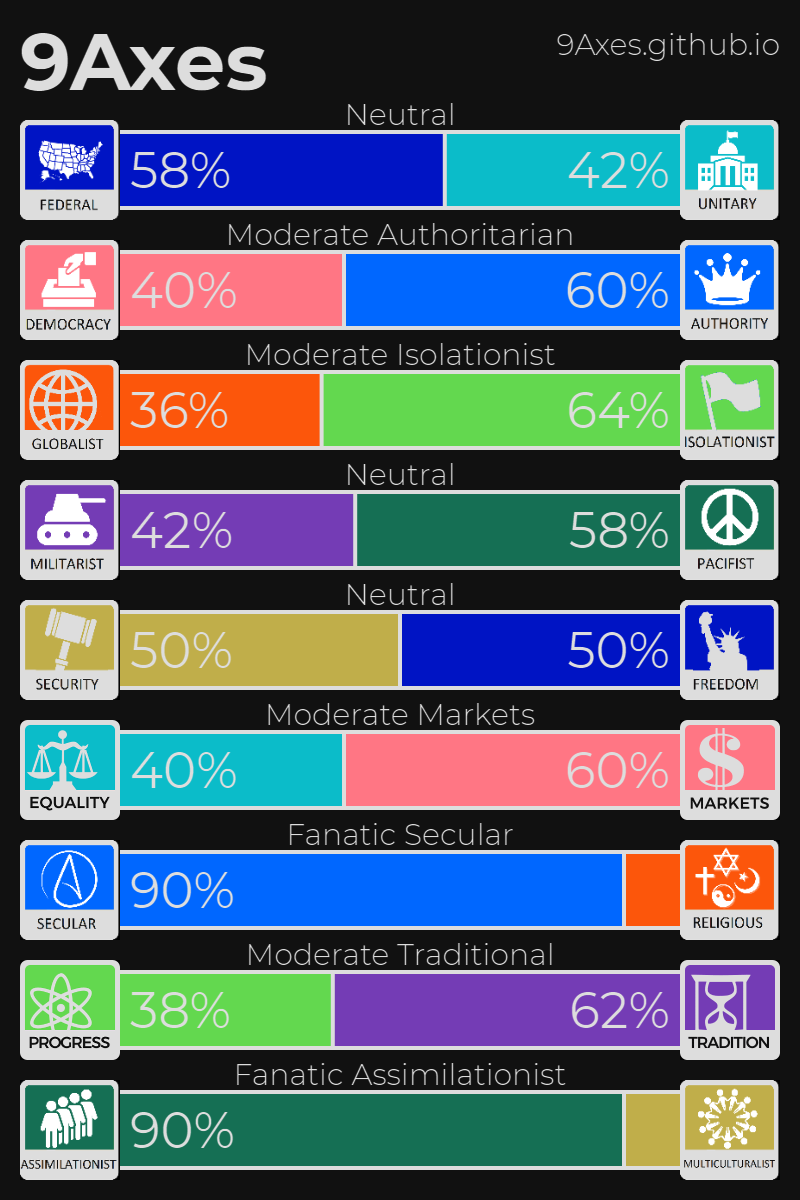 Federal vs. Unitary - this part is pretty problematic for me. In general, I believe countries should be united like hell and too much regional independence really sucks. Federal countries in existence already are justified in their federalization, since they're mostly really very separate people, separate culture and separate land unified under one global banner to dominate other countries together with coop, like USA, Germany, Russia, but for most of the others federalization sucks and countries should try to unify as much as they can. I dislike regions governing themselves, but I think smaller parts (cities, counties) should be allowed to govern their finances purely on their own and be independent in terms of day-to-day administration.

Isolationist vs. Globalist - poor countries need global effort and cooperation to aid their economy like Poland, larger ones should get more focused on themselves for their own good while maintaning good trade. Generally being extreme on either of these ends is retarded for me as well. Total isolation kills your economy, not putting your country first too.

Militarist vs. Pacifist - fuck wars but power is needed.

Equality vs. Markets - pure capitalism brings you USA and their XXI century slavery, capitalism is the way, but without regulations it's USA or shitcountries in South America, you need some welfare for basic survival, if it's not there people will do Red Revolution again, but welfare should just provide survival. Free education, universal healthcare.

Secular vs. Religious - don't care for religion at all, but government should be as detached from it as possible, and even theists should understand legal administration shouldn't have anything to do with religion, spiritual matters aren't at all connected to the government and politics, politics should be about law, economy and order, churches have no place in this thing. Government shouldn't be aiding churches and shouldn't acknowledge any single religion. Officials may follow whatever religion they want, but their ideas and laws should be explained by pure social logic on their own, you can't use "religion says" as a logical argument, proper constructs are independent and explain themselves on their own, it's like using "it's tradition" as reasoning (and I say that as quite a conservative myself) - it's just logical braindeath.
e: oh and while I don't really care for religion, Sunni version of islam is fucking garbage calling for slavery and treating people like garbage, and Catholic Church is literally a crime syndicate and should be mowed down like Yakuza headquarters


Progress vs. Tradition - well I love traditional values and I think they're not actually set and unmoving like many conservatives think, but are a result of slow, gradual evolving through centuries, and are a source of collective moral values in the community and should be maintained. Government still shouldn't use "it's tradition" as any kind of reason for anything like outlined above, but instead acknowledge specific values and their logic and should just be representative of community's way without going into ideological disputes. Personally I think lots of tradition should be valued on personal level (and that boosted my score). Still I'm also all in for personal freedoms and obviously any kind of discrimination sucks. People can oppose any traditional values as much as they want and that shouldn't come to play when impartial government matters come into play.

Assimilationist vs. Multiculturalist - all in for good workers coming to the country with huge filtration. Multiculturalism absolutely sucks and creates shit in countries. People feel good in the same cultural circle and clashing with others provide shit, that's it. 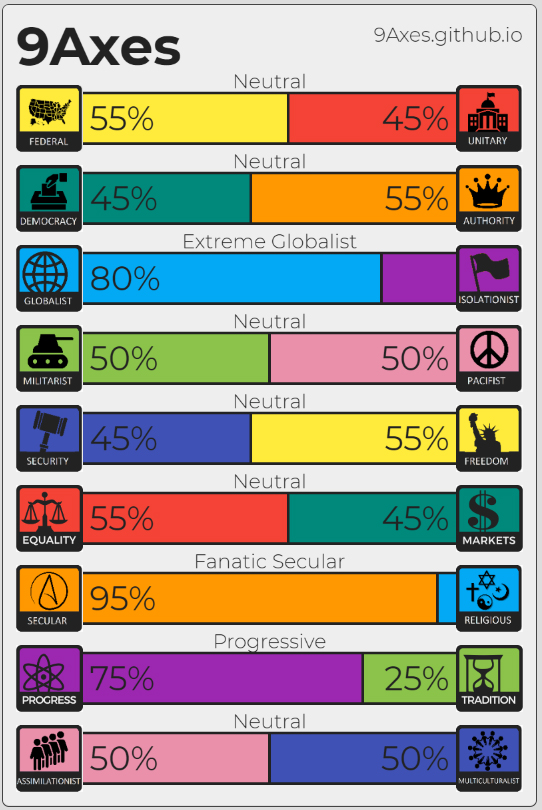 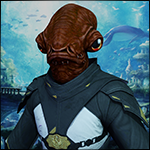 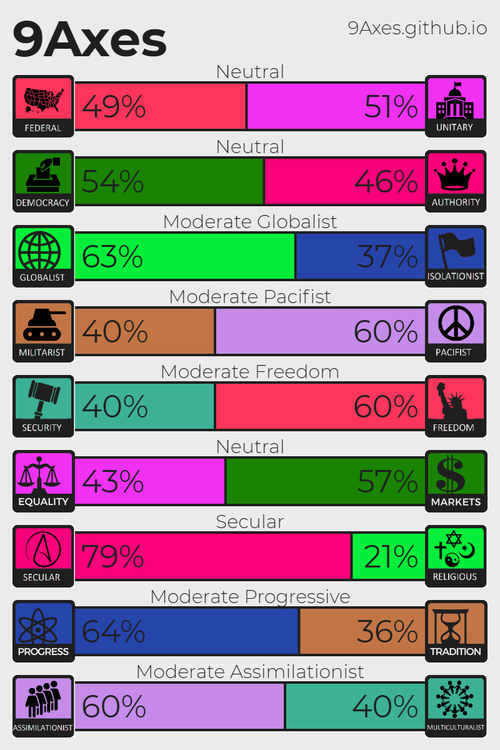 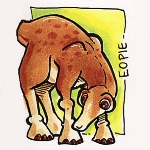 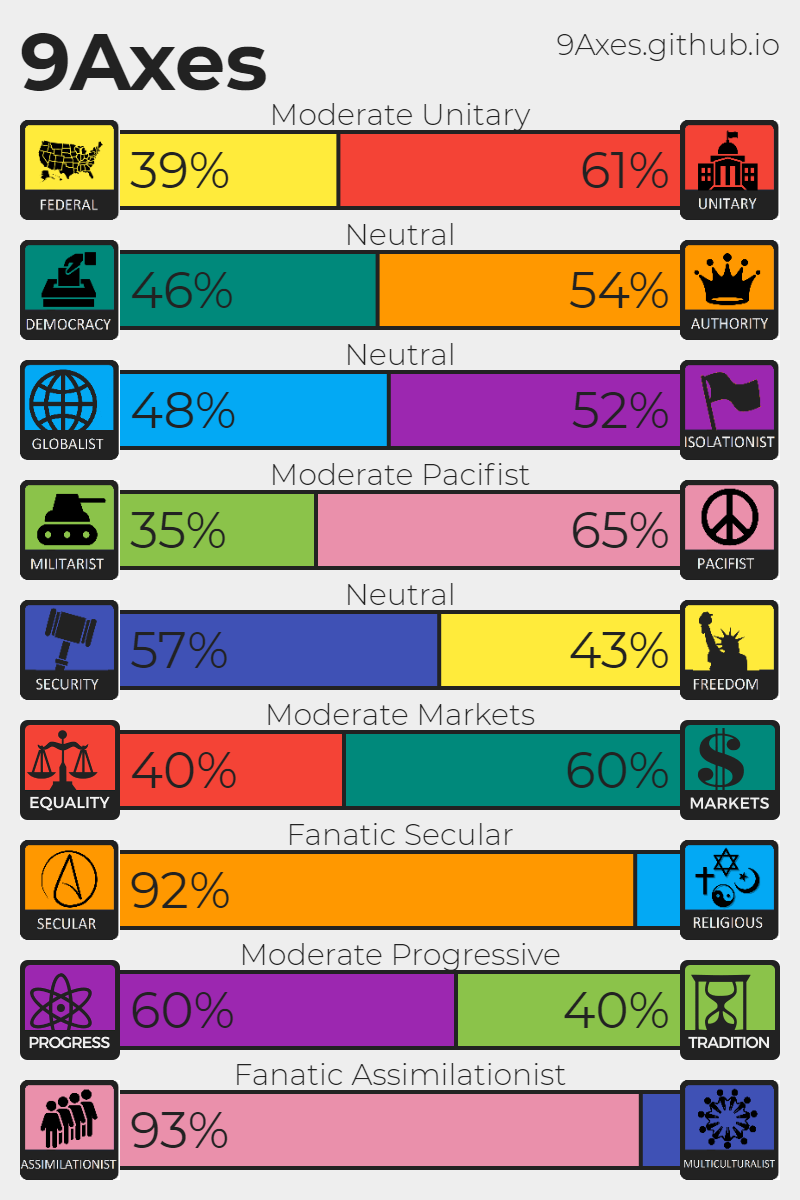 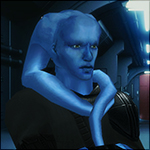